Got any old Sega magazines lying around? Perhaps in the loft, garage, or some other storage facility? If so, then you might be able to help us in our quest for a copy of every Sega magazine ever published in the UK. The SegaMags collection currently stands at 644 unique issues, and we’re offering to pay £25 per issue for any of the issues that we’re still missing. Please contact us if you can help out. Here’s a complete list of the Sega magazines and issues that we’re trying to track down:

Now, let’s take a detailed look at each of the Sega magazines on that list…

The final issue of MegaTech.

Steve Merrett, the last editor of MegaTech before it was sold on to Maverick Magazines, stated in the letters pages of Mean Machines Sega (issue 36) that the last issue of MegaTech that he saw was a “poster issue” — see the image to the right for the direct quote. Since there weren’t any poster issues of MegaTech up to and including issue 43, this means that issue 44 (the final issue) must have been the poster issue.

Nobody at SegaMags has ever seen the cover of this issue. We know nothing about the issue’s content (other than that it was a poster issue). 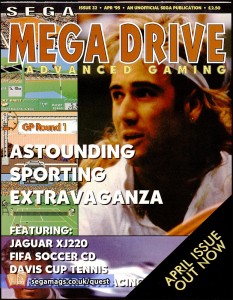 Yet another reprints issue. This issue reprints content relating to various sports games. Again, this issue was probably 32 pages long (which would be consistent with the corresponding reprints issue of MegaTech).

Image taken from an advert in issue 39 of MegaTech. 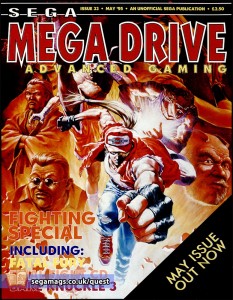 This particular issue reprints old content relating to beat’em-ups, and in all likelihood it was 32 pages long.

The front cover states that this issue contains articles on the following games: Fatal Fury (possibly both the original and its sequel), Final Fight CD, and Bare Knuckle 3 (the Japanese version of Streets of Rage 3).

Image taken from an advert in issue 40 of MegaTech. 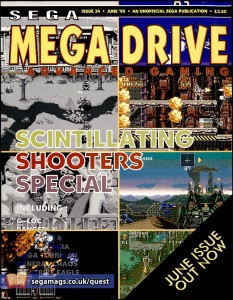 A reprints issue that focuses on Mega Drive shoot’em-ups (a “scintillating shooters special”). This issue was also probably 32 pages long.

Image taken from an advert in issue 41 of MegaTech. 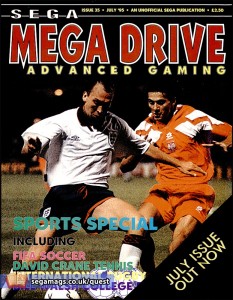 The second issue of Mega Drive Advanced Gaming to reprint old articles on Mega Drive sports games (I hope that there wasn’t any overlap with the games they selected for issue 32!). This issue was probably 32 pages long (like issue 42 of MegaTech).

Image taken from an advert in issue 42 of MegaTech. 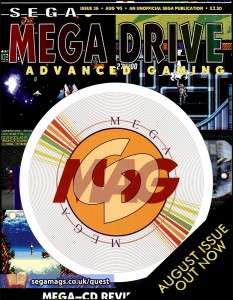 The penultimate issue of Mega Drive Advanced Gaming was a Mega-CD review special. This month, Maverick decided to jazz things up a little bit — the magazine’s logo uses a gradient-fill for the first time, and the cover features a large CD graphic. Once again, the issue was probably 32 pages long (if issue 43 of MegaTech is anything to go by).

The screenshots on the cover suggest that this issue featured reviews of the following games: Silpheed, Wolfchild, Sewer Shark, Bari-Arm, and Racing Aces.

Image taken from an advert in issue 43 of MegaTech.

Nobody has ever confirmed that MEGA lasted beyond issue 37 (the October 1995 issue). However, some anecdotal evidence suggests that it limped on as a “reprints” magazine for at least a few more issues. Given that Maverick Magazines was running MEGA at this point, and given their track-record with Mega Drive Advanced Gaming and MegaTech (which each had six reprints issues and a poster special before finally closing), it’s not too much of a stretch to think that MEGA (for which issue 37 was its first reprints issue) limped on for a few more issues issues.

The Next Month page of issue 37 indicates that issue 38 of MEGA was going to be a beat-’em-up special.

We don’t have any information relating to issue 22 of Sega Zone. The Next Month page of issue 21 was incredibly vague, only hinting that MegaRace and Battlecorps might feature. Since issue 23 (see below) was a poster issue, it’s difficult to even guess what happened in issue 22. Although we’re open to the possibility of this being a reprints issue, we think it’s probably unlikely. Maverick Magazines didn’t start reprinting old articles in Mega Drive Advanced Gaming and MegaTech until the start of 1995. So our best guess is that this issue probably contained some original content.

The page-count is unknown. Issue 21 of Sega Zone contained 52 pages, whilst issue 23 contained only 8 pages (plus posters). Somewhere between 32 and 52 pages seems like a reasonable estimate. 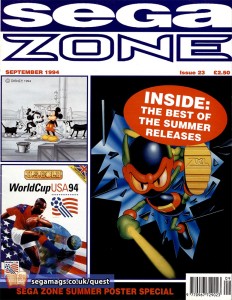 The first “poster special” from Maverick Magazines, and the final issue of Sega Zone. This issue was only eight (!!) pages long: one page for the front cover, three pages of adverts, and four pages containing a stripped-down games directory. It also contained several posters (presumably including the three images that are shown on the front cover). The chances of finding a complete copy of this issue — with all of the posters still intact — are vanishingly small. Nonetheless, we live in hope! 😉

Image scanned from an incomplete copy of the issue.

It could turn out that issue 26 of Sega XS never saw the light of day. The front cover of issue 25 contained the words “Good Knight Special” in large print, which was a play on the issue’s medieval theme (hence the use of “Knight” instead of “Night”). This could have been a subtle indication that the magazine was closing (as in, “Thank you, and good night”). However, even though there isn’t a shred of evidence to suggest that issue 26 of Sega XS exists, we’re keeping it — and any subsequent issues — on the “wanted” list until we know exactly when the magazine ended. 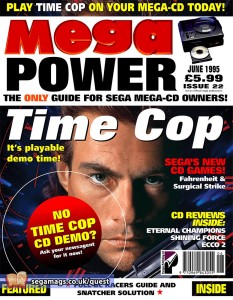 By this point in its life, Mega Power was billing itself as a dedicated Mega-CD magazine. This issue came with the Time Cop demo disc (which was also cover-mounted on issue 45 of Sega Pro CD). Note that we’re after a copy of this issue with or without the demo disc. This issue was probably 36 pages long (just like issues 21 and 23).

The front cover suggests that this issue features Mega-CD reviews of Eternal Champions, Shining Force, and Ecco 2, along with guides to BC Racers and Snatcher.

Image based on the back-issues pages of Mega Power.

The Next Month page of Saturn+ issue 2 stated, in relation to issue 3, that: “Saturn meets PlayStation head on! We unveil all the Saturn conversions from Psygnosis!”. Make of that what you will.

Issue 2 of Saturn+ was 116 pages long, whilst issue 4 was only 32 pages long. This really doesn’t allow us to make a very good guess for how many pages were in issue 3. If pressed, we’d say that the page-count was probably closer to 32 than 116. 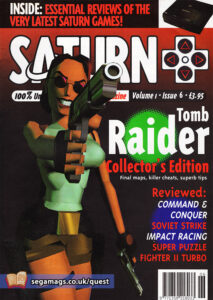 This issue is 32 pages long (like issues 4 and 5 of Saturn+), and it contains part 2 of the Tomb Raider solution that was started in issue 5.

Image taken from an incomplete copy of the issue.

The only thing we know about this issue is its proposed release date (April 24th, 1997). We don’t know for sure that this issue was actually released — but we do know that it was definitely planned. It’s likely that this issue (if it exists) was also 32 pages long.

Well, that just about wraps it up! Remember, we’ll pay £25 per issue for any of the Sega magazines that are listed on this page (or £100 for issue 6 of Saturn+, if somebody comes forward before October 1st 2020). So the next time you stumble upon a pile of video game magazines, take a minute to see what’s there. You never know, those old Sega magazines could be worth a small fortune. 😉

Oh, and remember: if you’re able to help with the SegaMags quest in any way, then please get in touch.